Well, I managed it! A year of continuous vases in the house, cut from the garden! It’s been a delight, both in the doing and the viewing! I did think I might fall by the wayside, especially towards the end of the year, as material becomes more scarce, but I was surprised by my own imagination. And I was helped by the inspiration from fellow bloggers who contribute to Cathy’s weekly meme “In a Vase on Monday”. Cathy’s blog is “Rambling in the Garden” – most enjoyable and inspirational, so please, do go and have a look! Seeing what others achieved gave me many ideas. So thank you all!

My December vase had to be the Christmas one. I had to include the Christmas necessities of Holly – both green and variegated – and Ivy – again variegated, complete with their berries. I chose to also include some Christmas Box (Sarcococca). Sadly, the traditional red element was lacking. I struggled to find many red berries in the garden. They must have all fed the birds, since they had been there earlier in the month. The only red element I could find were two holly berries and a couple of sprigs of Skimmia “Rubella” buds. Never mind, I had the props to finish it off, in the form of some Christmas pot pourri and a beautiful hand made card. And our colour scheme helps too! I must confess to using the language of flowers, in a bit of a sentimental moment, by adding a sprig of Myrtle for good luck and one of Rosemary for remembrance. 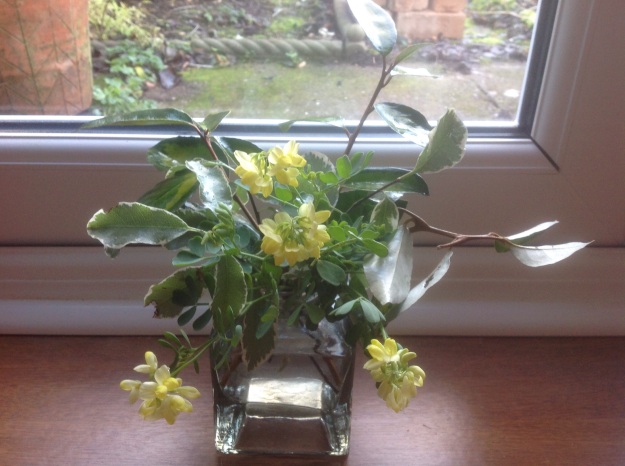 Earlier in the month, the vase was decidedly more pastel, using the newly blooming flowers of Coronilla “Citrina”. These flowers are beautifully scented and their leaves are a lovely glaucous blue, so I chose some creamy lemon variegated evergreen leaves to set them off, in the form of Pittosporum “Silver Queen” and Elaeagnus “Limelight” to accompany them. 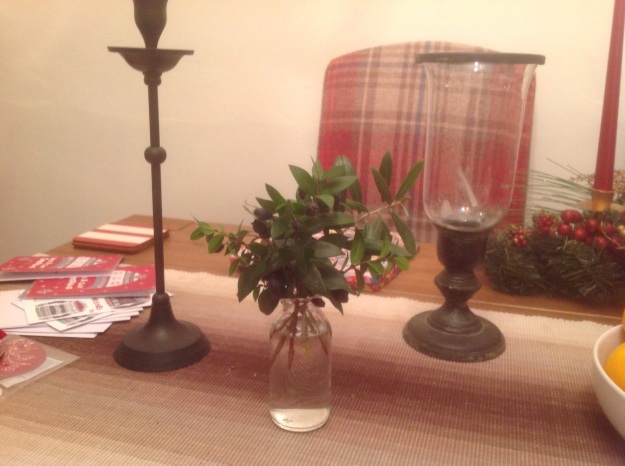 As the last vase faded, I was faced with a bit of a problem. It would be several days before I could get into the garden in daylight to concoct the next vase (I’m no lark!) and no way could this vase last. Then inspiration struck! What could I pick from the doorway? Our front porch is overwintering our olives and myrtle, the latter sporting some magnificent juicy, black berries. So by the light of the hallway, the follow-on vase was concocted! Ok, a modest little number, but a pleasing little vase nonetheless! 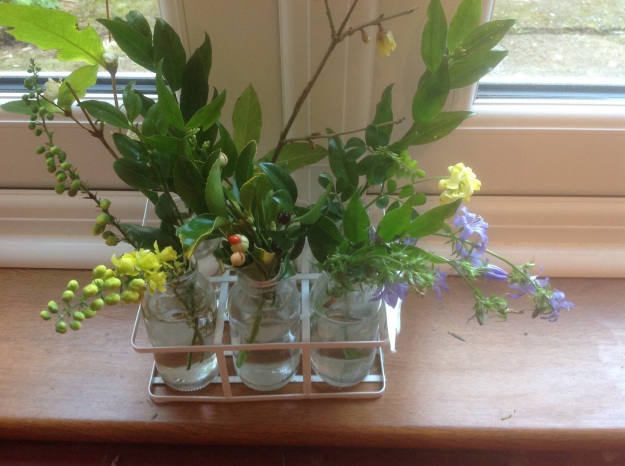 To round off the year is the “Full circle” vase I showed in my last post. It’s based on the first vase I did, in my little milk bottles, using sprigs of Sarcococca, but this time with a few added winter blooms. Standing proud at the back, are scented sprigs of fresh Lonicera fragrantissima and spicy Chimonanthus praecox alongside the delicate Coronilla again. On the sidelines are a beautiful sprig of Mahonia japonica with its tiny daffodil-like flowers and the ever flowering blue Campanula. In centre stage are some berries, including the cheeky tongues of the Euonymus berries – I just love them!

And this time I found a suitable prop in the form of our brass armillary, displaced from its normal site by the Christmas decs. Somehow it seems appropriate for a New Year vase! 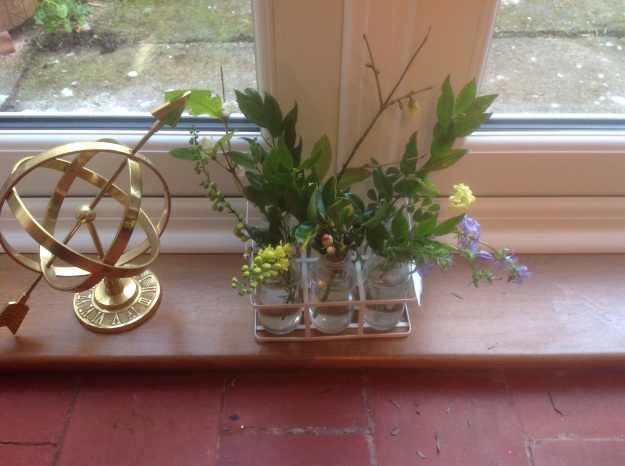 And finally, the proof!

Follow The Long Garden Path on WordPress.com
Join 76 other followers

The life and loves of a plantsman