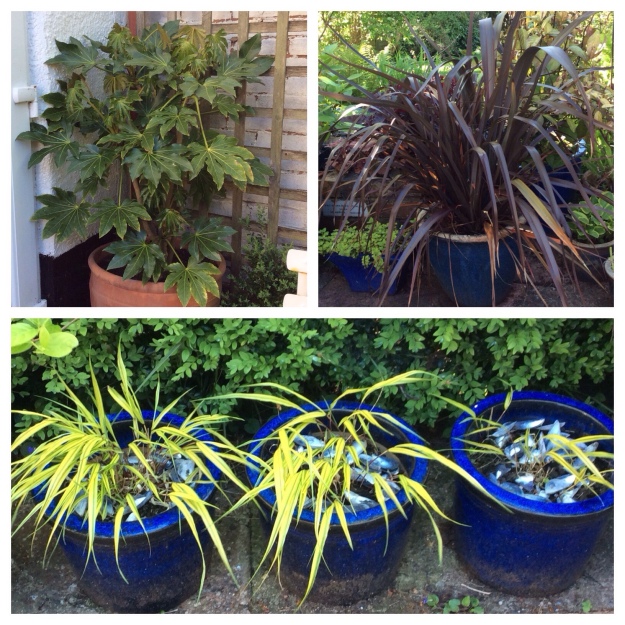 I don’t know if anyone has found my other blog, The Green Guru. It’s more about my business projects and hints and tips, and less about me and my own garden exploits.

A young family friend is embarking on her first garden, which is steep (it’s in Bristol) and largely decked, so she has asked me for recommendations for creating a garden in containers. Well, it’s a huge topic, dependent on so many factors, most importantly personal taste, and not easy to cover in one text. So I’m using this blog to try to give her some ideas to get started, and to encourage them to create a garden that they all can enjoy.

If this would interest you, I’d love you to have a look! The link is on my page, The Green Guru, above. 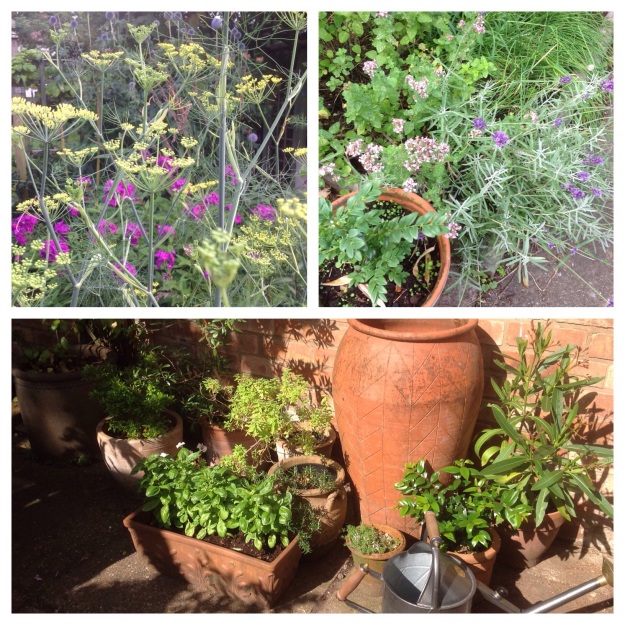 Do you remember the demise of the old ash tree, that was just a seedling when we moved in? 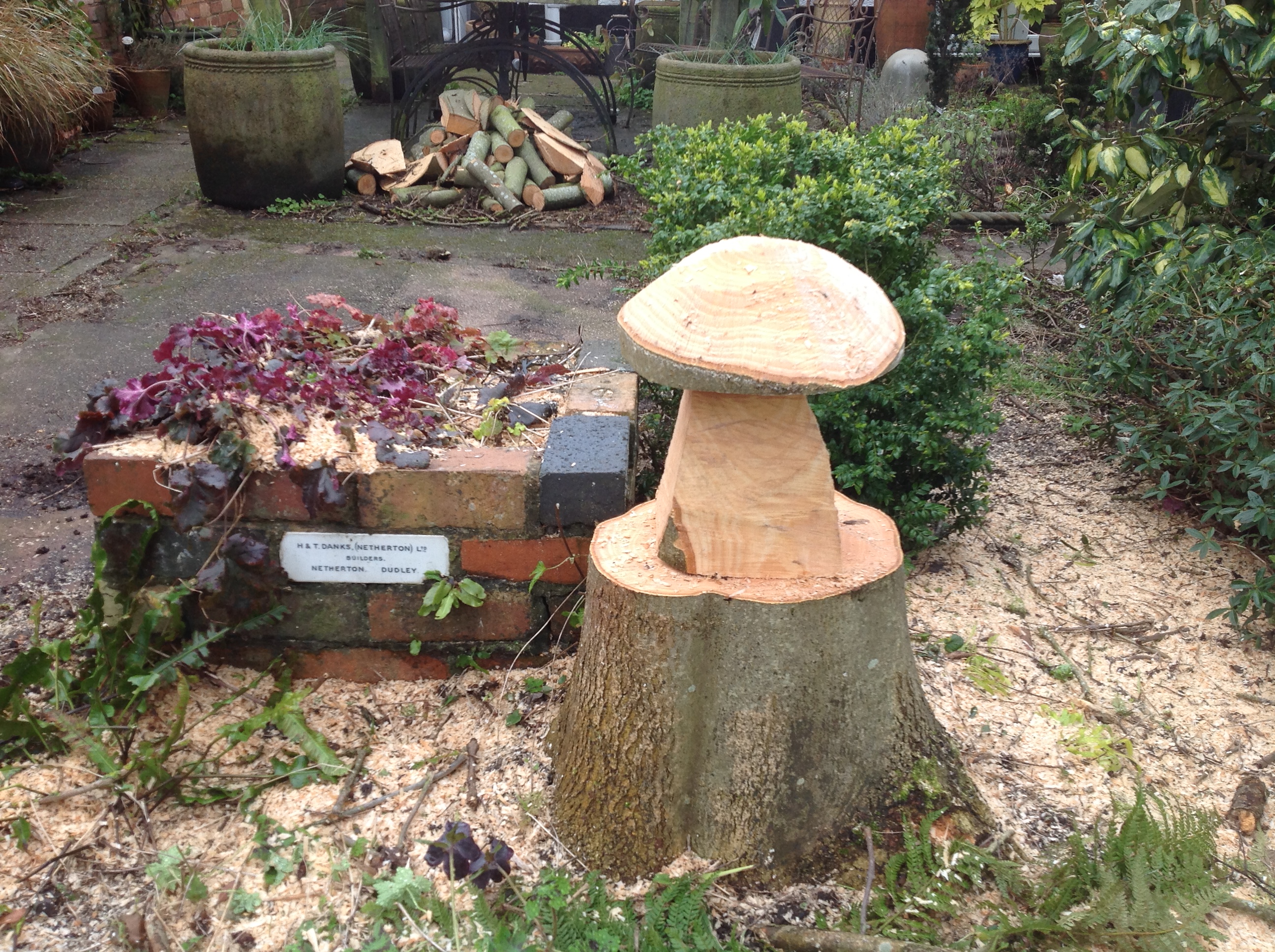 Well, a few years on, the planting has regrown around it, and the “mushroom” (now nestling beneath a tree) has been replaced with a new, blue birdbath.

I had a very pleasant surprise this morning on my walk around the estate! I was eagerly lapping up all the signs of life returning to the garden. The enlarging clumps of snowdrops, the pink pinpricks of the cyclamen coum forcing their way through the leaves, and the first hellebore buds showing bright flashes of red and yellow. And meanwhile, revelling in all the winter perfume from sarcococcas, Chimonanthes, lonicera and mahonia.

But then I noticed this little beauty – Helleborus bocconei. Its very first flower!

This hellebore was given to me by a fellow blogger, Cathy from “Rambling in the garden”, several years ago (maybe about four?) when she paid us a visit. A seedling then, that she had propagated, but which has not made much progress since. Each year a new leaf would come to replace the old one that died off but that was it. I wasn’t very hopeful of it flourishing. Then today I saw its very first flower! 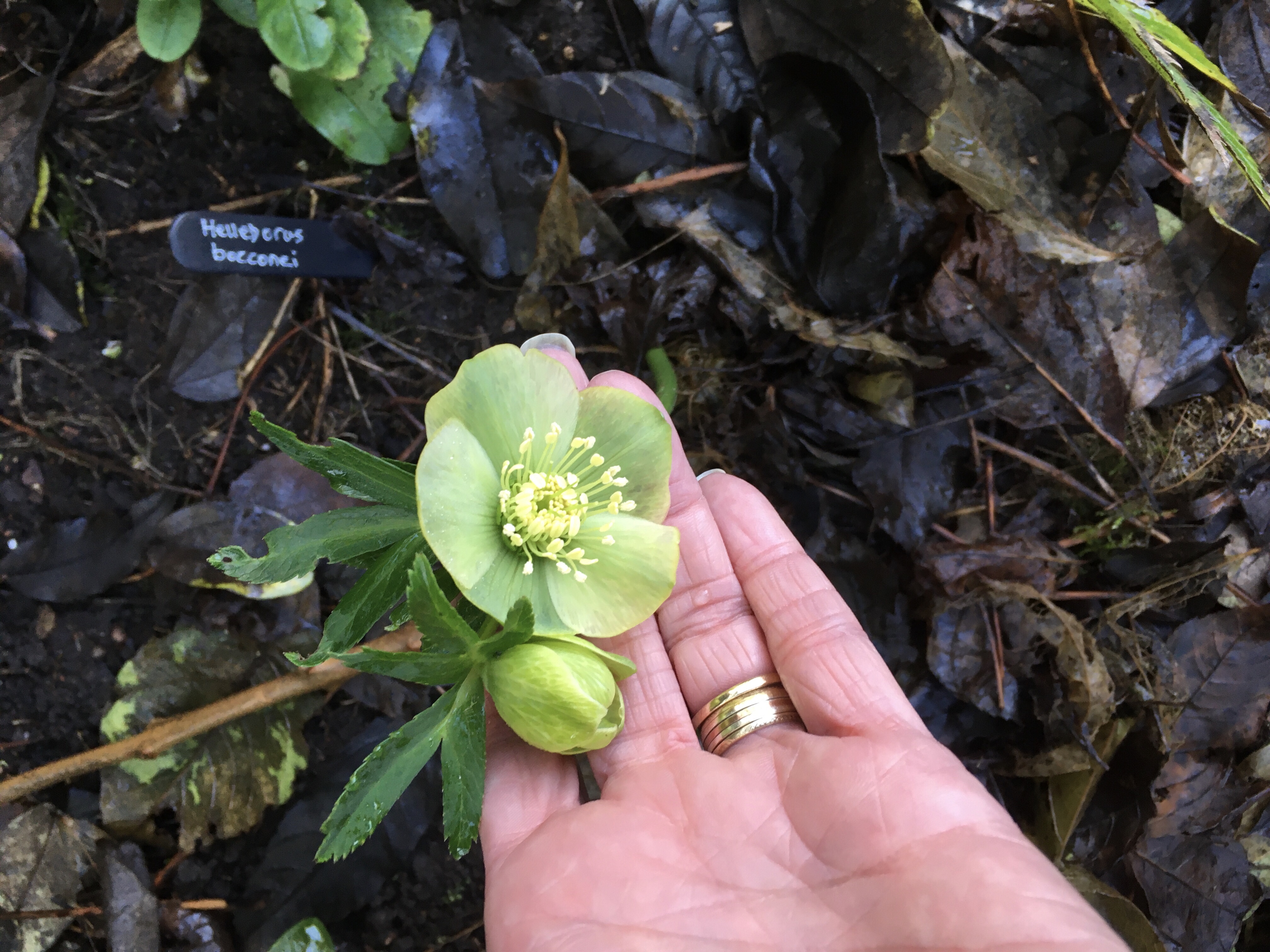 A beautiful lime green – when you raise the flower head up!

And I’ve read it’s scented too! So now I’ve got to get down on my hands and knees!

Thank you, Cathy! Rewarded for patience!

I posted a photo on Instagram four days ago, of our clump of colchicums, remarking how these delicate flowers, which are one of the first signals of autumn in our garden, are so fleeting. No sooner do they appear than they get battered and devoured by slugs before you can grab your camera. Four days later, I’ve had plenty of time to grab the camera. They’re still standing strongly, with the colour deepening, and the flowers opening in the sunshine.

This is the best and longest display we’ve had yet, thanks to the kind weather we’ve had recently.

The slugs and snails will have to wait a bit longer for their banquet!

It’s been a while since I blogged, and it’s well overdue for a catch up.

No major changes have happened recently in the garden. It’s now becoming well established, with maintenance and tweaking the order of the day. Humdrum stuff really!

But at the height of summer, with everything blooming and smelling divine, I just had to share!

I love hydrangea “Annabelle ” at this time of year, just as the flower heads change from lime green to pure white.

And, as always, when June moves into July, we have the battle for perfume champion. 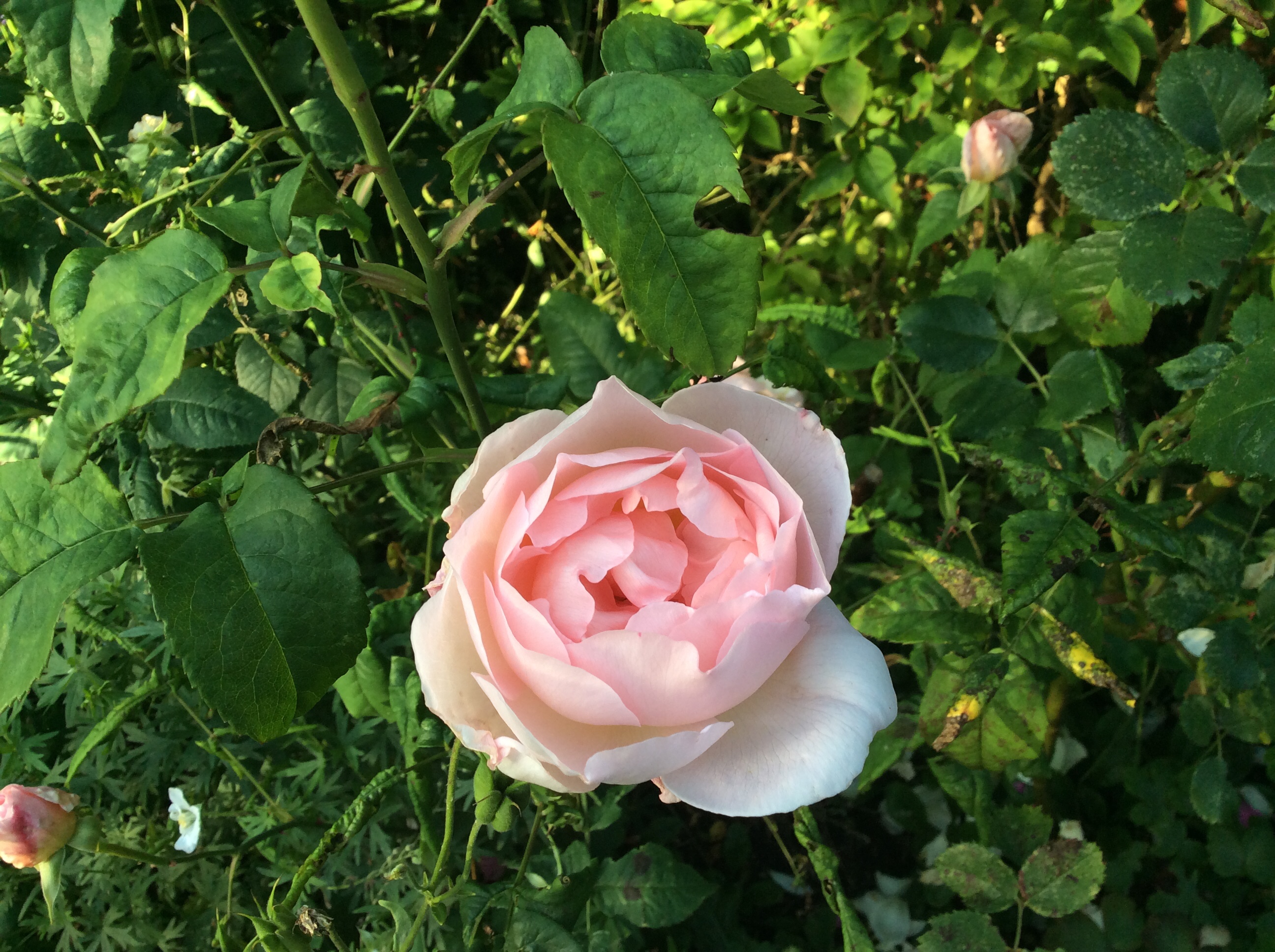 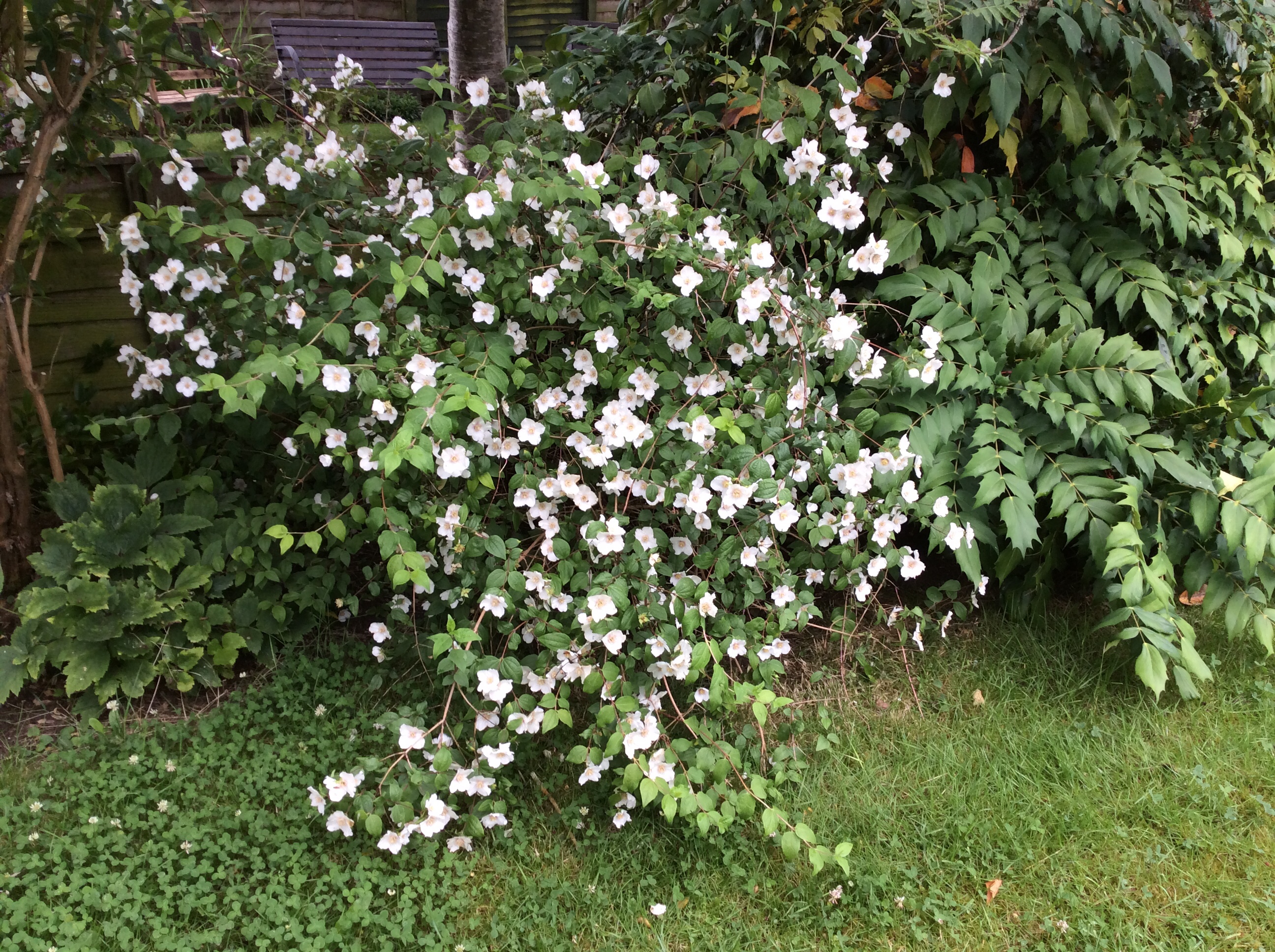 Mind you, there are other contenders, too.

….and our “borrowed” honeysuckle!

I’m afraid the jury’s still out!

Chloris http://thebloominggarden.wordpress.com/ has been asking which new scented plants, I’ve purchased in the meantime. Not so many, I’m afraid! I’m having to be more disciplined as space is becoming limited. I’ve bought Cistus purpurea to add to the Cottage border, to replace a failing rose, (which has now sprung back into life in a pot – typical!) and a Calycanthus “Venus” for the same reason! (But that’s for another time!)

Of course, there’s also the impulse buy from Malvern show, Rhaphiolepsis umbellata, which is still languishing in its pot, while I ponder where to put it. Must get this one right first time – it won’t tolerate being moved.

And my most recent purchase is – surprise, surprise – not scented! It was bought at the local carnival this weekend and was not an impulse buy. It was one that was premeditated for adding to my collection of blue glazed foliage pots, a dark leaved Phormium, to set off the other surrounding dark planting. (Sadly, with no label!) 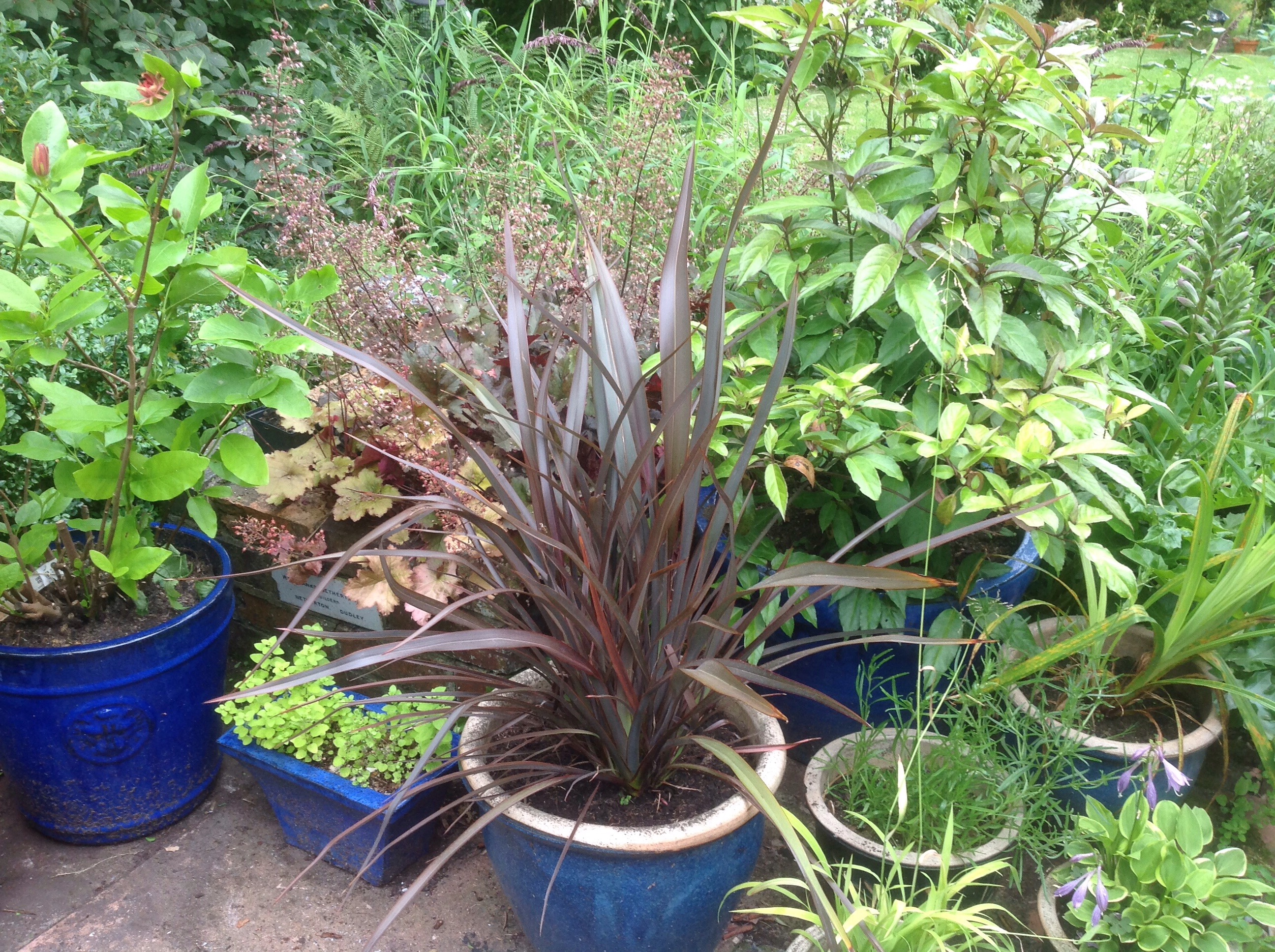 I’ve also experimented with seasonal pots, using night scented phlox (easier than Zaluzianskya ovata!) as the main ingredient, which I’ve grown from seed. This is the first time in many years I’ve dabbled in this aspect of the garden. I’ve planted up two large pots and used them alongside complementary summer bedding.

The first is a large, metallic planter where I’ve picked up on the white flowers of the phlox backed with purple, and paired it with a scented Petunia (of course!), one whose perfume takes me back to summer holidays. 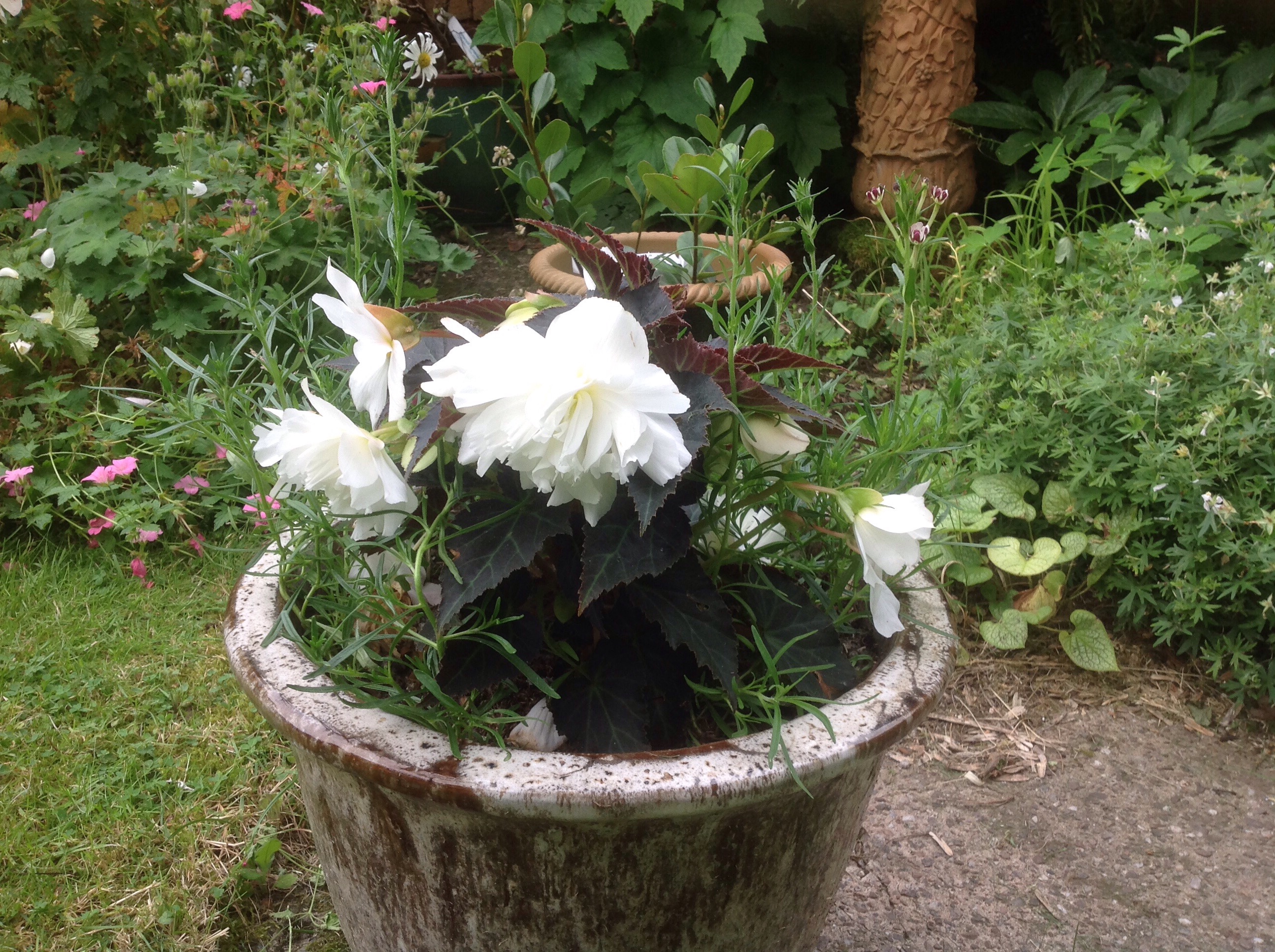 The other is in a brown and white glazed pot, where I chose a white begonia with the darkest, chocolate brown leaves I could find, to plant with the phlox, to match the planter.

The rest of the phlox plants I grew have been planted in a couple of containers on their own. As yet, the phlox is yet to flower, though it’s not far off. You can just see them starting to open in the brown pot.

Elsewhere in the garden, the Grass garden was really in need of an overhaul, due to some plants, including, I’m afraid to say, weeds, taking over. It’s now settling in and performing well. 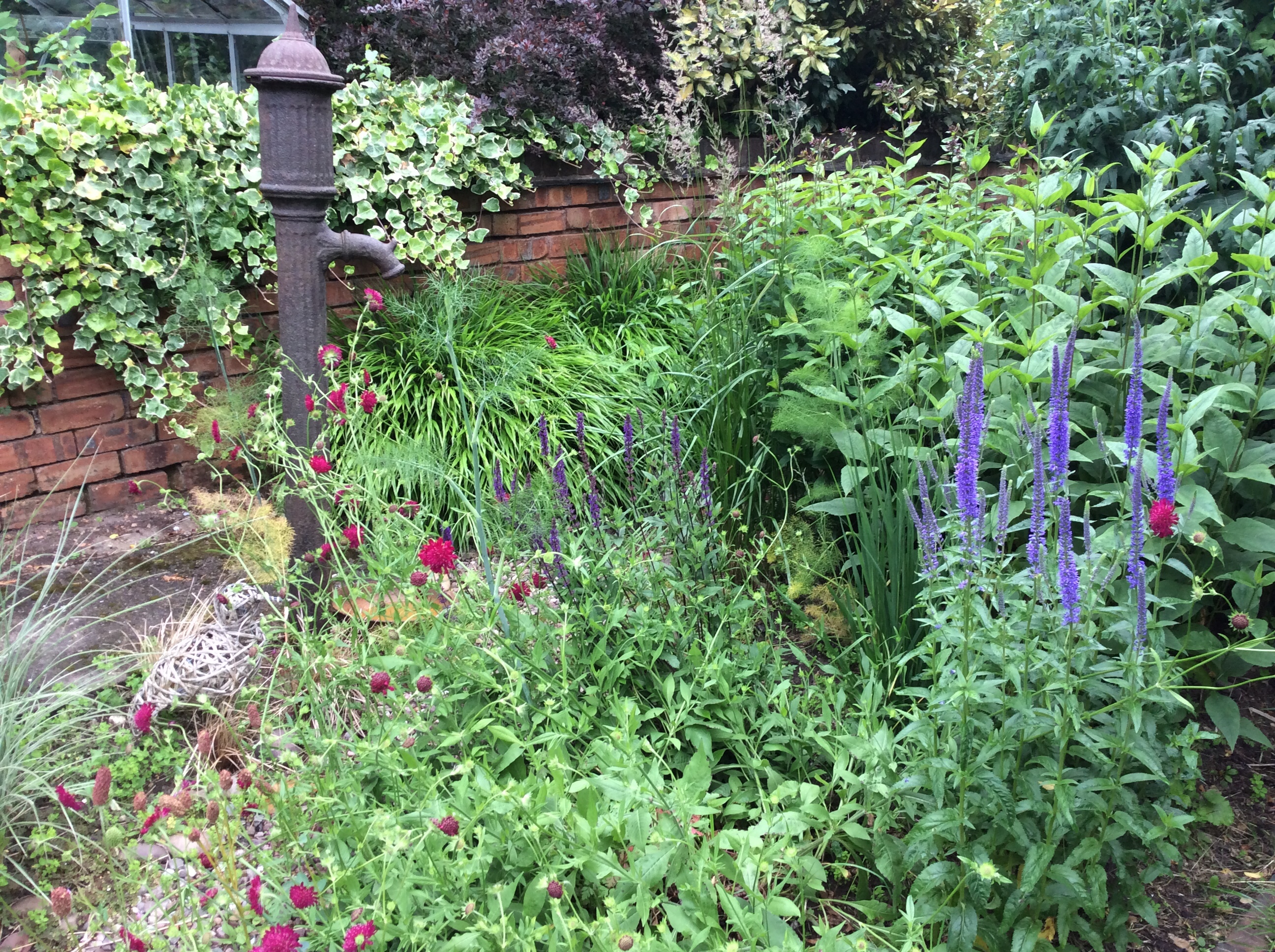 So that’s a round up of our main developments!

And it’s good to be getting back into the swing again! So will see you again soon! 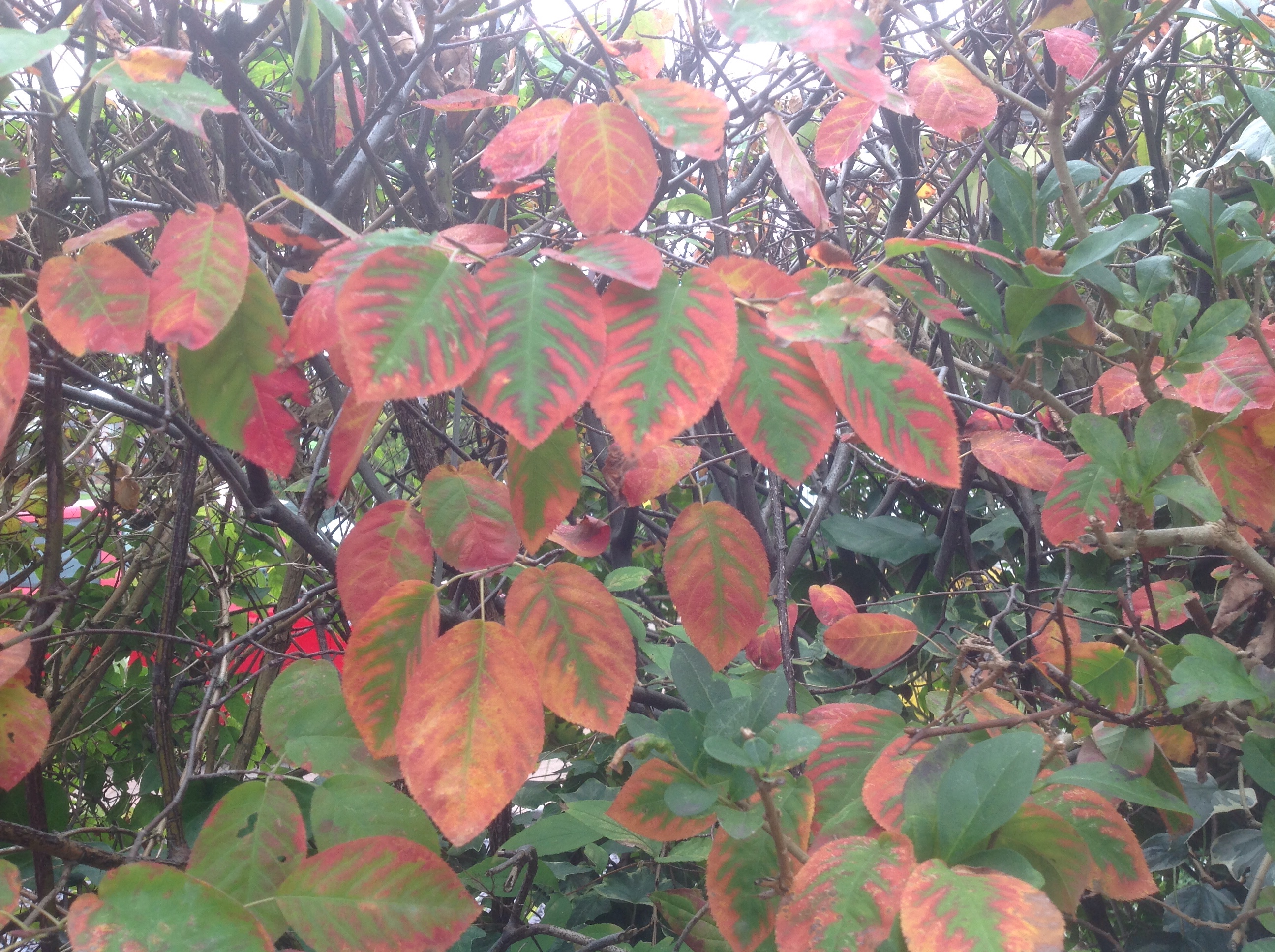 Botanical Journey from the South

Photographic Journals from the South

The life and loves of a time-poor plantsman